What Has Passed Around the Galactic Centre Black Hole? 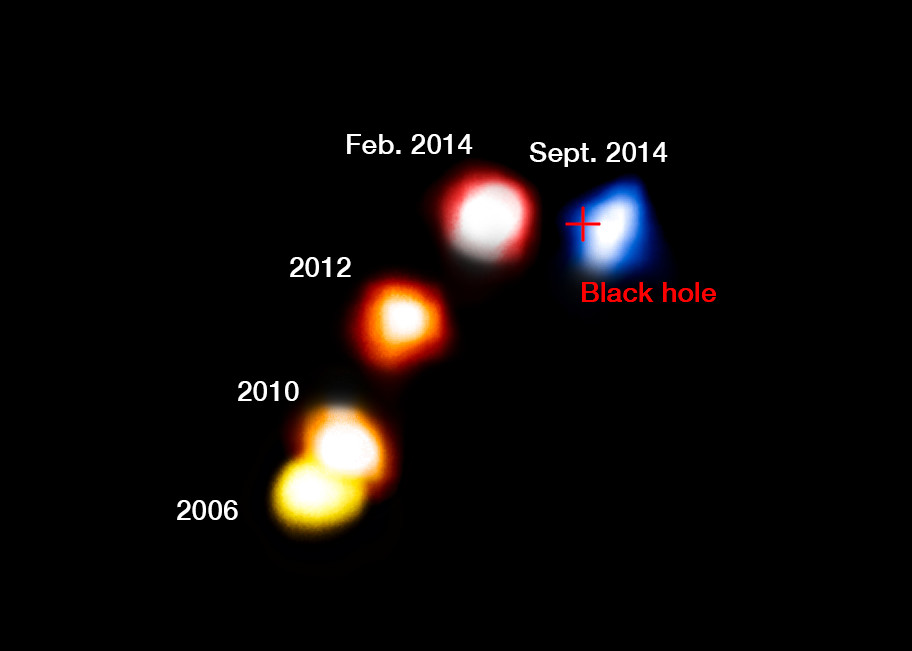 Our observations of the object called G2 confirmed that it made its closest approach to the supermassive black hole at the centre of the Milky Way in May 2014 and had survived the experience.

We used one of the world's best telecopes - the Very Large Telescope (VLT) - to point the central black hole innermost environment. This observation had a strong impact on the acceptance of the theory that the object is in fact a star. Before the ovservations had been available, many astronomers were thinking that the object could be a gas or dust cloud. In that case it would be stretched and ripped apart on its passage around the black hole by the effects of its gravity. Based on that theory a gigantic fireworks were predicted from the galactic center. The object, however, continued its way most likely it being a young star and the black hole itself had not shown any increase in activity.

Our newest analysis of archive VTL data suggests that the orbits of stars around the supermassive black hole at the centre of the Milky Way shows a subtle effect predicted by Einstein’s general theory of relativity. There are hints that the orbit of the star S2 is deviating slightly from the path calculated using classical Newtonian physics.

The change due to relativistic effects amounts to only a few percent in the shape of the orbit, as well as only about one sixth of a degree in the orientation of the orbit. If confirmed, this would be the first time that a measurement of the strength of the general relativistic effects has been achieved for stars orbiting a supermassive black hole.

This tantalising result is only a prelude to much more precise measurements and tests of relativity that will be made using the next generation GRAVITY instrument. The star S2 will make a very close approach to the supermassive black hole in 2018 and we will be watching!

Our team has made an extraordinary long and detailed obsevation of a supermassive black hole in the core of an active galaxy identified as IRAS 13224–3809 that resulted in a remarkable discovery of ultra-fast winds.

We used ESA and NASA space telescopes to make a most detailed observation of an ultra-fast wind flowing from the vicinity of the black hole. The recorded wind speed reached 71 000 km/s, which is nearly a quarter of the speed of light – putting it in the top 5% of fastest black hole winds known.

Typicaly, a particular object is observed for couple of hours and then several months or even years later we observe it again and see if there has been a change. This time, the telescopes observed the black hole 17 days straight revealing the extremely variable nature of its winds. Such a long observation campaign has allowed for the first time to observe changes in the winds on a timescale of less than an hour.

Outflowing gas is a common feature of supermassive black holes that reside in the centre of large galaxies. Millions to billions of times more massive than the Sun, these black holes feed off the surrounding gas that swirls around them. This process produces a ton of radiation, including X-rays, from the innermost part of the disc around the black hole. Occasionally, the black holes eat too much and burp out an ultra-fast wind that manifests itself in the radiation. These winds are important because they are able to clear the surrounding gas away from the black hole and therefore to suppress the birth of stars. In this way, that can have a strong influence on regulating the growth of the host galaxy. 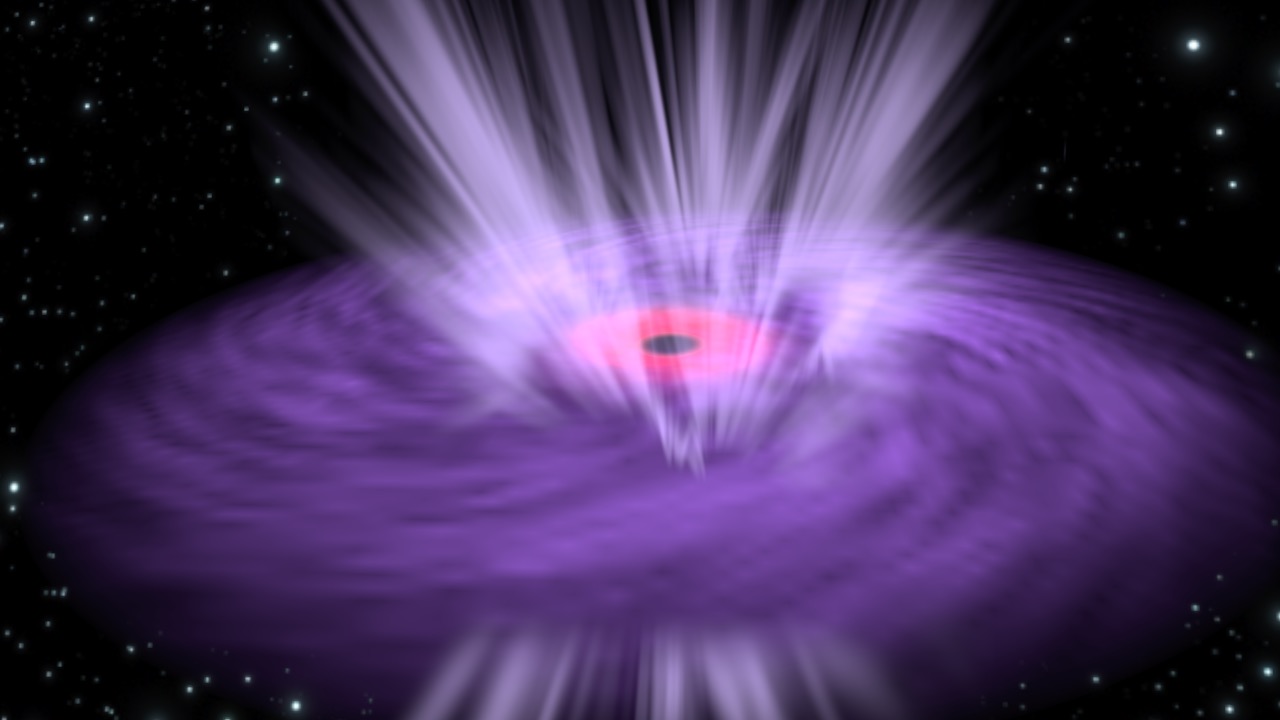 Did you know accretion disks can act as mirrors?

An accretion disk is a gaseous structure that is large in area but small in thickness, quite like a gramophone record. It does not have a solid surface because it is made from gas, but it still can reflect light. There are two processes involved in this, Compton scattering and photoabsorption followed by emission of recombination lines. In Compton scattering, an incoming photon hits a free electron and the impact changes photon's direction, energy and also polarization (the spatial orientation of the photon's electromagnetic field). In the photoabsorption/emisson process, the photon is captured by an atom and a different photon is emitted a tiny bit later after the electron structure of the atom has settled down.

All the accretion disk we can observe are very far away and we cannot resolve them in telescopes. We can only learn how they look and how ther work by analyzing their radiation, which is a mixture of reflected and unreflected photons. A decomposition of the reflected part then tells us something about the reflecting surface – the accretion disk.

We have put together the capabilities of some of the best experts, their computer codes and the power of the University of Strasbourg supercomputer to create the most detailed computation of the reflection process. The result of a many months long computation is an 11 TB large table of spectroscopic data showing a huge forrest of emission/absorption lines with an unprecedented energy resolution that matches the energy resolution of future space telescopes like Athena or Astro-H2.

Reverberation is a relatively new technique that helps to get a better insight into black-hole accretion disks and processes that produce X-ray radiation.

It is now believed that every large galaxy has a supermassive black hole sitting at its center and having a a weight of millions to billions of solar masses. If they have a chance, these black holes feed off the surrounding gas that forms an accretion disk as the gas continuously falls onto the black hole. Apart from the relatively cool disk, a corona exists above it and around the black hole that is sparse, very hot (has temperature of many millions of Kelvins) and quite variable.

The varying X-ray radiation from the corona can be detected on Earth by space X-ray telescopes. What we see, however, is a mixture of photons that travel straight from the corona to the telescope and photons that go towards the disk first, are reflected from its surface and only then travel to the telescope. The latter obviously come with a delay relative to the direct ones, because they have to travel longer path.

Photons are not taged so in principle we cannot know if a particular photon went straight or was reflected. But we can employ a bit of an insight and a clever technique, called reverberation mapping, to compare signals in different energy bands and separate it into the straight and reflected components with a certain level of statistical confidence.

This way we can get an indirect view of the innermost parts of the accretion disk that would be inaccessible othervise. With our new tools, astronomers .

Read more in this illustrative description of reverberation.